We have a great propensity for love, and sometimes for loving the right thing.

Kids need to see their parents struggle. Kids need to be involved in our struggles. Their observations and involvement will prepare them for a healthy, mature transition into adult life.

I made a deliberate decision that my son will not observe me playing X-box games. I determined this because of the current technology addiction people succumb to.

In Korea, I often see toddlers playing with their parent’s phone. When we go out with friends, they often entertain my son with their smart phone. Later in life these parents will complain about their child’s obsession with their phone. Solzhenitsyn was right to ask, “…and who is prepared to destroy a piece of his own heart?”

There is nothing wrong with kids being quiet, or bored while adults are talking and drinking coffee. When we go out with friends, we always bring coloring books and Hot Wheels and our son has never complained. We want him to be able to acknowledge and appreciate the world around him. When he is an adult, we want him to be the man who can sit and have a conversation with anyone; to be engaging.

Adults spend a lot of time in lines, at: airports, grocery stores, libraries, amusement parks. Reflecting on one’s own thoughts is a lost art, as is soul searching. Standing in line is a poor man’s sport, but it can be enriching—if we teach that. Also, we are preparing him for parenting by modeling a parenting style that will be natural for him. When he is standing in line with his kids, he will know what to do.

I teach the long devotion. I hope I am teaching how to be the man in line that people want to be next to.

When I stand in line with my son, I often hold him up so he can see what we are doing and explain everything. I let him know when it is a good time to play, or not. Most importantly, when we hear sirens, we stop to pray for the rescuers and the victims. Faith must be active at all times.

Back to gaming. I determined that it is better for a boy to watch his dad struggle at playing guitar, than to watch him enhance his on-line stats. Ironically, a few weeks after I purposed in my heart to lead acoustic devotions, I was given an X-box 360 and a stack of great games.

I don’t know anything about making music. I can play the radio and that’s it. Struggling to accomplish something beautiful is a life-long commitment to spiritual enrichment. Accepting the challenges and punishments for pursuing Beauty is mysticism, it is a practice that both destroys and renews the soul. Men need this. Men need to be crushed by absolutes, infinite truths and tenderness. Men who are destroyed by spiritual beauty, are humbled; vulnerable. They have feelings. Men like this count the days of their lives, making them meaningful. They have perspective. They die well.

I made this commitment and began the painful process of earning callouses on my fingertips. Guitar strings can’t hold themselves down, someone has to do it. I downloaded lyrics and chords for songs I thought would be enriching to my family and my son in particular. I started with “Christmas for Cowboys”, by John Denver. My commitment includes playing in church once a month. We will learn some songs together and play them Sunday mornings.

My wife and I often hear him singing the Cowboy song to himself. That makes us happy. I chose this song because of the line: All of the good gifts given today, ours is the sky and the wide open range.

No matter where he is, or the circumstances of his life, I want him, in his heart, to be standing under an endless sky with his arms outstretched. I want him to be grateful. I think a simple song can teach him that.

I have added some new songs to our acoustic devotions, songs that I believe will cultivate the good dirt of his soul: “Man in Black” by Johnny Cash, “Downtown” by Petula Clark, “Some Days Are Diamonds” by John Denver, and “Eye of the Tiger” by Survivor, (just because).

A man can find and share solace when he plays guitar. I was reminded of this when my friend spoke of her father’s recent death. She showed a picture of him as a soldier in the Vietnam War. He was the guy in the platoon who played guitar and led the singing. That determined it for me. I want my son to be that man, the one who plays guitar and leads the singing, even during war (or financial ruin, divorce, loneliness, unemployment…).

There are existential truths in some songs that lift and educate Everyman. When a man knows his place in the universe he can be comfortable with his place with God.

I plan on including many Johnny Cash songs because of the street smarts he shares. When I am ready to play Man in Black for my son, I will also share a lesson about how a man needs to help others, to be associated with those in need. He is to carry a burden for those who cannot carry it for themselves.

I wear the black for those who never read,
Or listened to the words that Jesus said,
About the road to happiness through love and charity,
Why, you’d think He’s talking straight to you and me.

Well, we’re doin’ mighty fine, I do suppose,
In our streak of lightnin’ cars and fancy clothes,
But just so we’re reminded of the ones who are held back,
Up front there ought ‘a be a Man In Black.

I didn’t have a dad and I’m not from a Christian home, so my devotions are going to be unconventional. But when you are teaching the long devotion, you need a song in your heart.

Ah, I’d love to wear a rainbow every day,
And tell the world that everything’s OK,
But I’ll try to carry off a little darkness on my back,
‘Till things are brighter, I’m the Man In Black. 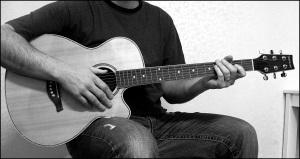 This blog is a resource for families who are looking to disciple their kids intentionally into life with God. In addition to providing a free download of the Good Dirt devotional, here you’ll find daily blog entries by families from all over the world who are on this journey, too. They’ll tell stories about glorious days with God, down-in-the-dumps seasons, goof-ups, and finding Jesus in ordinary family life. We hope their adventures encourage you along the way.

My Tweets
© Lacy Borgo and Ben Barczi, 2013. Unauthorized use and/or duplication of this material without express and written permission from this blog’s author and/or owner is strictly prohibited. Excerpts and links may be used, provided that full and clear credit is given to Lacy Borgo and Ben Barczi and Good Dirt Families with appropriate and specific direction to the original content.
%d bloggers like this: